“Verification” is a process of confirming the originating status of goods that
have already been imported under preferential tariff treatment of FTA.

Customs conducts verification of origin in accordance with the provision of each
FTA and Customs-related laws and regulations.

In order to benefit from the preferential tariff under an FTA, the imported good
must qualify as originating in accordance with the applicable rules of origin
of the FTA. Through verification, Customs ensures the proper application of
preferential tariff treatment under FTA.

As for the verification with the importer, Customs sends a written request for
information on the originating status of the imported good(s).
Customs determines whether the good qualifies as originating on the basis of
the information and documents provided by the importer.

If the originating status of the good is not confirmed through the verification
with the importer, Customs may carry out verification with the exporter or producer.

If Customs cannot confirm the originating status of the good through the above
process, preferential tariff treatment would be denied.
Furthermore, depending on the cases, the good may be subject to an additional
tax/penalties for underpayment of Customs duties.

Here is the findings of the survey analyzed Origin Verification trend, based on
questioning WCO Member Customs administrations.

Points to be checked at the documentary examination

109 Customs administrations that responded to the question on the main
reasons to conduct verification, doubt in the authenticity and doubt in the accuracy of the
content of the proof of origin were both common reasons for carrying out verification.
The result of the survey is as follows: 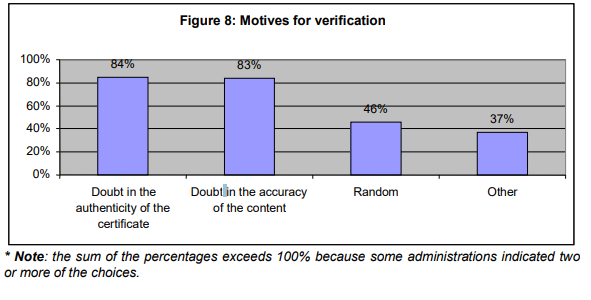 109 Customs administrations that responded to the question on the addressee of
the verification request, the verification through the competent authorities in the
exporting country was the most commonly accepted channel. The competent authorities
include Customs, chambers of commerce, trade/industry ministries, other authorized
bodies, etc.
Among the choices provided in the survey, the Customs in the exporting country was the
mostly chosen channel for verification. The following is the result: 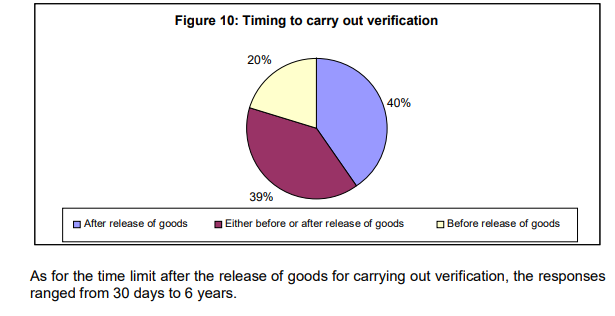 97 Customs administrations that replied ‘yes’, 81 (84%) indicated that the
preferential trade agreements were the basis for providing information. 67 (69%)
indicated that they would do so under the bilateral customs mutual assistance
agreements.