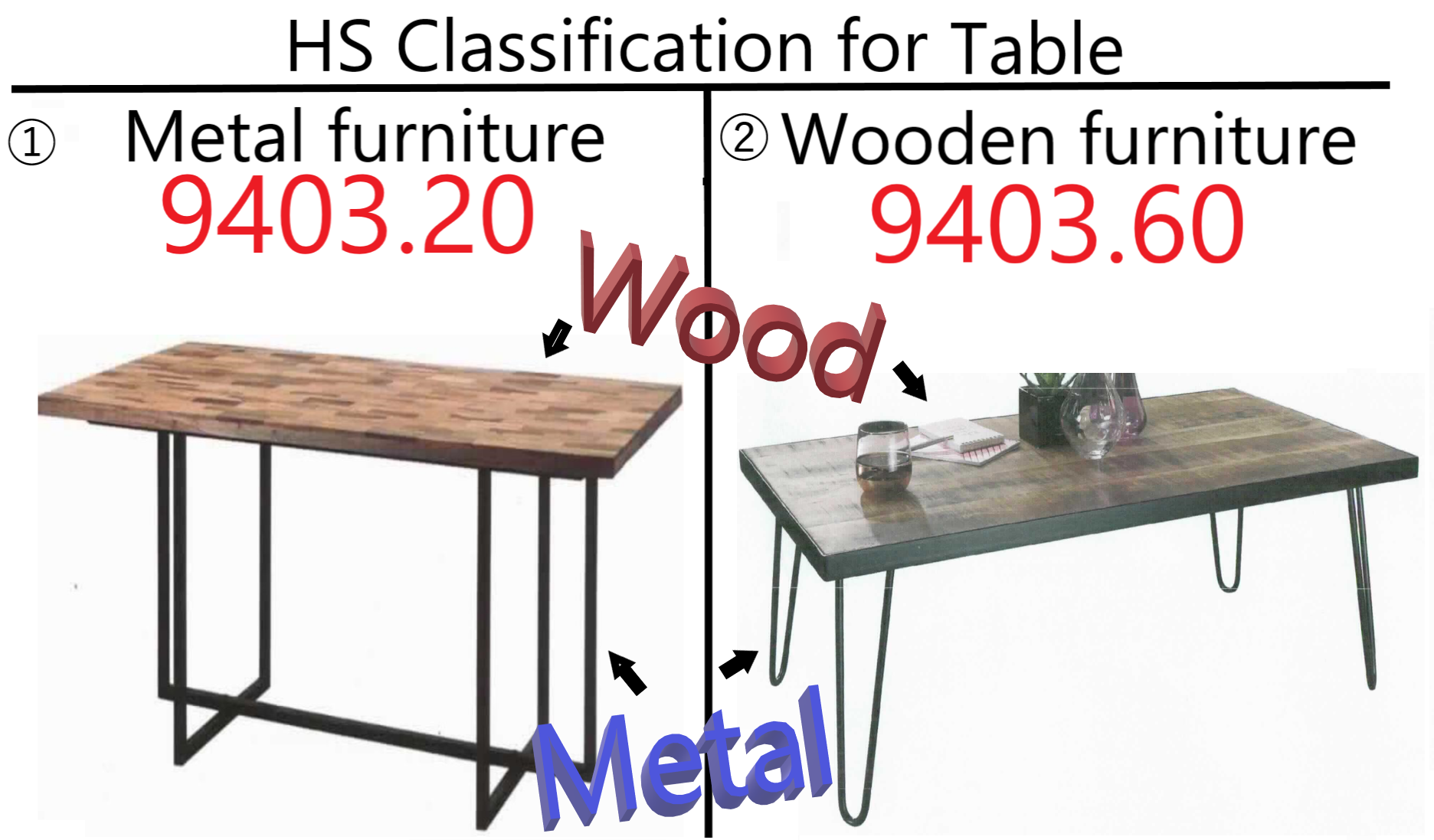 Item① and ② are similar products.
Table top is made of solid wood and legs are made of metal.

According to DEBTI11598-19-1 Item① is classified as “metal furniture” because
—————–
The material character of the product is determined by its importance for use as
a stability-imparting element by the metal. (GRI3b)
—————–

According to DEBTI29850-18-1 Item② is classified as “wooden furniture” because
—————–
the physical character of the goods can not be determined by the metal frame,
which is considered a stability-conferring element, nor by the wooden table top,
which has the highest value (in a ratio of 90 to 100% by weight) ,
Thus, the product is to be classified under the latter subheading.(GRI3c)
—————–

How do you classify this kind of item?? 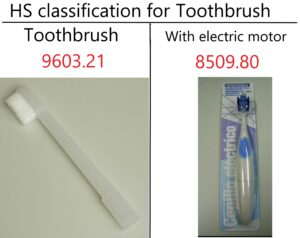 Both are apparently a toothbrush but when an electric motor is equipped, it is excluded from “Brushes” 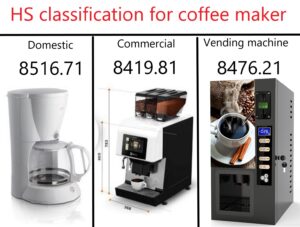 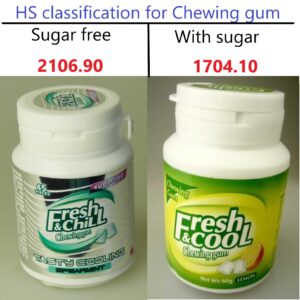 Sugar-free Chewing gums are classified as “Food preparations not elsewhere specified or included.” in 2106.90

Chewing gums containing sugar are classified as “Chewing gum” in 1704.10 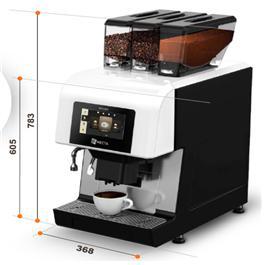 Coffee maker is classified as “Machinery, for the treatment of materials by a process involving a change of temperature such as heating, cooking, roasting, distilling, rectifying, sterilising, pasteurising, steaming, drying, evaporating, vaporising, condensing or cooling,”

When it comes to classifying Wireless headsets, there is a problem because it’s classifiable into two headings 8517 and 8518.

And each headings and subheadings are below.

851762
— Machines for the reception, conversion and transmission or regeneration of voice, images or other data, including switching and routing apparatus

851830
– Headphones and earphones, whether or not combined with a microphone, and sets consisting of a microphone and one or more loudspeakers

I had searched many customs rulings and found there are two patterns of classification records 8517 & 8518 for Wireless headsets.

See How to search world customs ruling with an image.

8517.62 to “Harmonized Commodity Description and Coding System Compendium of Classification Opinion” states below. 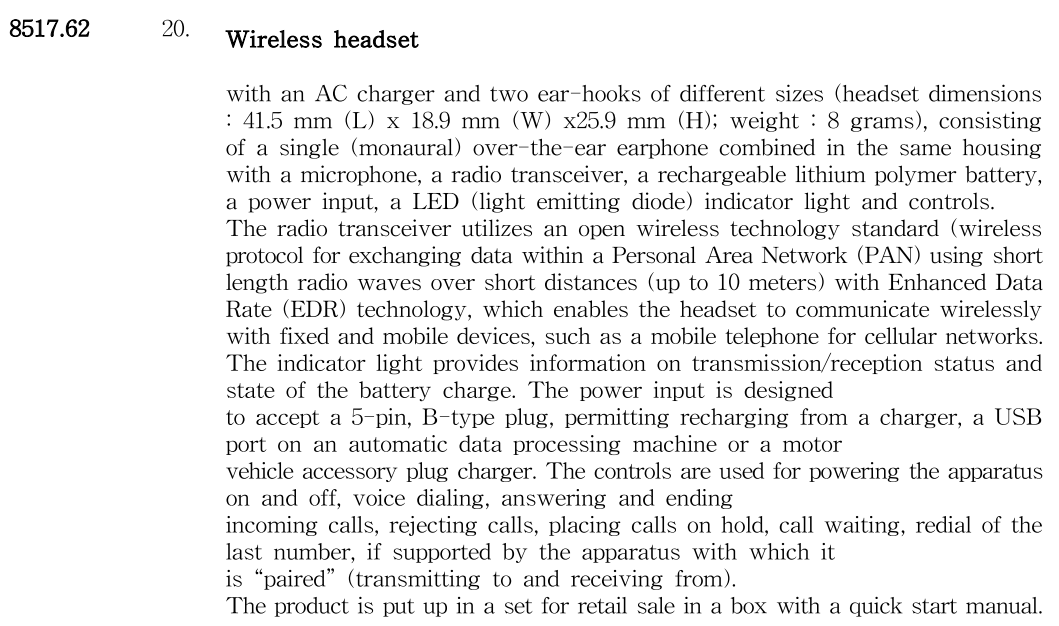 It seems that the Compendium of Classification Opinion supports Wireless headsets to be classified in 8517.62.

India customs ruling state that
“Headphones combined with a microphone of heading 8518 carry only audio signals and are not an active part of a network, whereas a Bluetooth headset with mobile telephony function is an active part of a wireless network, includes a software part for the wireless network and simultaneously receives/transmits voice and data in a wireless network. Thus, “Bluetooth Wireless headsets for mobile phones / cell phones” equipped with communication device fully comply with the subheading 8517.62.”

Below is Danish Customs rulings. a remarkable part of it is that there is a statement that an applicant requested classification at 851762 but Danis Customs rejected it.

See red-colored text in the description.

A long time ago, headsets are connected to audio devices with wires. in that era, there might be no problem classifying them as “Headphones“(HS:8518) but nowadays there are many headsets that do not have wires. Therefore HS classification system can not catch up to the development of the device, and that causes this kind of problem.

There are few documents stating that wireless headset is classified 8517 and indeed wireless function should belong to “apparatus for the transmission or reception of voice, images or other data, including apparatus for communication in a wired or wireless network(HS:8517)”.Hence If I was to classify wireless headset, I would classify it in 8517.

But the wireless headset is also nothing other than “Headphones“(HS:8518)

So wireless headset is apparently classified under two headings, therefore, I think it would be clearer if rulings apply GIR3(c) to classify it in 8518.

I posted this issue on Linked in to collect opinions from connections.
as a results, most of them supported it to classify 8517.62
— Machines for the reception, conversion and transmission or regeneration of voice, images or other data, including switching and routing apparatus.

after that, I searched the definition of wireless headset classification and found EU document that classify them clearly.

Nowadays many wireless headsets have a function to answer a phone call and talk with a built-in microphone. That type of headset is classified in 8517.62.

But there is a fact that few customs classify wireless headsets in 8518 as “Headphones”.

Therefore importers who intends to bring Wireless headsets should be careful.