“Neutral elements” or “Indirect materials” means goods used in the production,
testing or inspection of goods but not physically incorporated into the goods,
or goods used in the maintenance of buildings or the operation of equipment
associated with the production of goods, including:
(a) energy and fuel;
(b) plant and equipment;
(c) tools, dies, machines and molds;
(d) parts and materials used in the maintenance of plant, equipment and buildings;
(e) goods which do not enter into the final composition of the product;
(f) gloves, glasses, footwear, clothing, safety equipment, and supplies; and
(g) equipment, devices, and supplies used for testing or inspecting the goods.

Those are called “indirect materials” in the NAFTA and TPP legislation and
“neutral elements” in the ATIGA and PAN-EURO-MED origin legislations.

Despite the different approach to the origin rule for “neutral elements” in the
PAN-EURO-MED and the ATIGA origin legislations and “indirect materials” in the
NAFTA and TPP origin legislations, it is considered that there is no difference in
the practical application of these rules.

Example:
A part is manufactured in a plant in country A. It is to be exported to country B under A-B FTA.
The rule of origin for this part requires non-originating materials not to exceed 40% of the
final value of the part.
Machines used to manufacture the part, spare parts used in the maintenance of these
machines and the fuel used to run these machines are all originating in a non-FTA third country C.
Similarly, the safety equipment and protective clothing used by the factory workers come from
non-FTA countries.
While calculating the value added rule of origin, the non-originating machines, spare parts used to
maintain them, fuel, safety equipment and protective clothing are disregarded or
calculated as originating (depending on the agreement).

NAFTA and TPP origin legislations
The machines, tools, equipment or other goods not incorporated into the final product are
considered to be “originating materials”, meaning that they are taken into account as originating
elements for the calculation of the regional value content. The use of such materials has no
negative implications for origin determination of change in tariff classification rules since they
are considered as “originating input”.

ATIGA and PAN-EURO-MED origin legislations
It is not necessary to determine the origin of the machines, tools, equipment and other goods
not incorporated in the final product since such elements can be disregarded for origin
determination purposes. 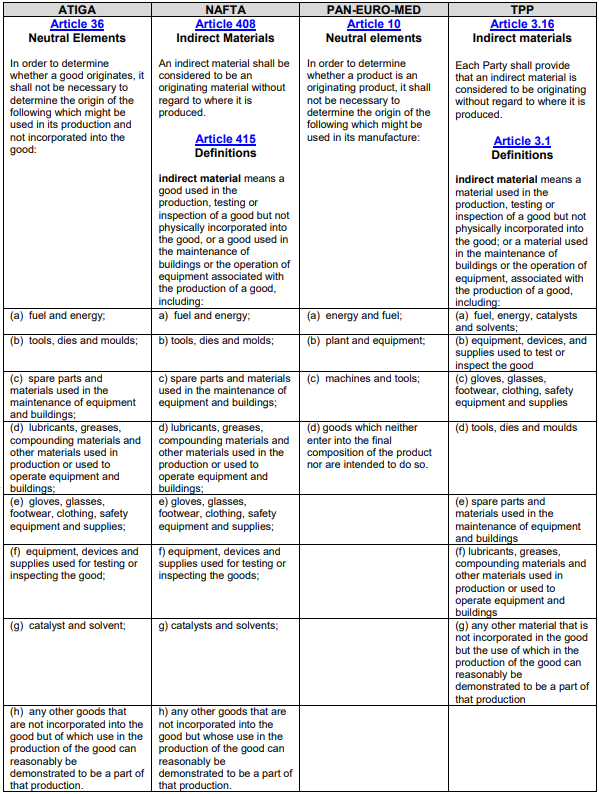