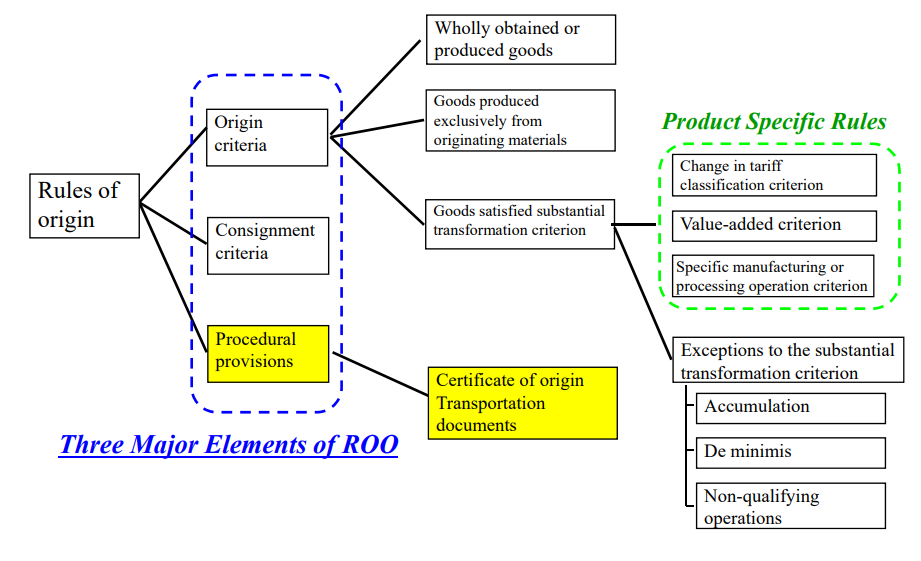 The preferences granted under a free trade agreement are limited to products
fulfilling the origin rules of the respective agreement.

All origin legislations contain provisions on how the preferential origin of a good
can be proven and certified.

Retrieved from: OUTLINE OF RULES OF ORIGIN

Under the self-certification system, the importer declares that the goods are
originating goods by submitting an origin declaration document which may be
completed by either the importer, exporter, or producer of the goods.
It is introduced under the JapanAustralia EPA, along with the third party certification
system above.
When claiming preferential tariff treatment with the selfcertification, submission of an
explanatory sheet on the originating status of the good is generally required in addition
to the origin declaration document.

Retrieved from: OUTLINE OF RULES OF ORIGIN

Comparison of Origin Certification System in the ATIGA, the NAFTA,
the PAN-EURO-MED and the TPP origin systems

The ATIGA Origin System has 31 rules (under Annex 8) regarding the certification
of origin of goods and other related administrative matters.
The ATIGA origin legislation contains a simple form (Form D in Annex 7) of
proofs of origin and certification requirements. It also contains exceptions to prove
the originating status by a certificate of origin.

In addition, there are various ways how government authorities are involved in
the issuing of certificates of origin.

The competent authorities of the Parties to the PAN-EURO MED Agreement are
directly or indirectly involved in the issuing of certificates of origin through the
authentication of certificates or the approval of exporters who can be authorized
by the customs authorities of the exporting country to issue proofs of origin
themselves without former authentication by the customs authorities
(invoice declarations irrespective of the value of the consignments).