Third Country Invoicing (TCI) refers to the arrangement,
where an invoice that accompanies the Preferential Certificate of Origin (CO)
and used for the clearance of goods in  the importing Party, is not issued
from the exporting Party but from another  country who may not necessarily
be a Party to the same FTA.
In some FTAs, TCI is commonly referred to as Third Party Invoicing. 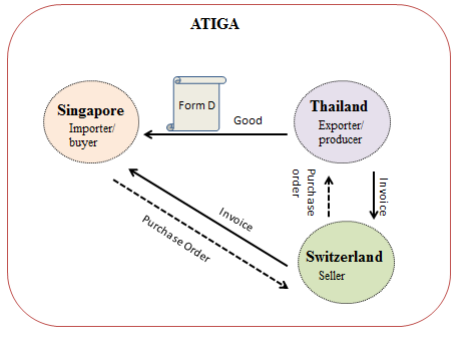 Retrieved from:Handbook on Rules of Origin for Preferential Certificates of Origin

An originating good is exported from Thailand to Singapore with a Form D
(i.e. Preferential CO under ATIGA).
However, the invoice billed to Singapore is issued from Switzerland
(i.e. any countries except Thailand and Singapore).
Singapore can still accept the Form D and grant preferential access to the
good indicated in the Form D even though the invoice is not issued from
Thailand but another country that is not a Party to ATIGA.

Under such circumstances, the applicant of the Preferential CO would
have to indicate details of the invoice issued from a third country in the
Preferential CO.