When the HS code of a good differs from all HS codes of non-originating materials,
the good is qualified as an originating good.

This method is called “Change in tariff classification criterion(CTC)” 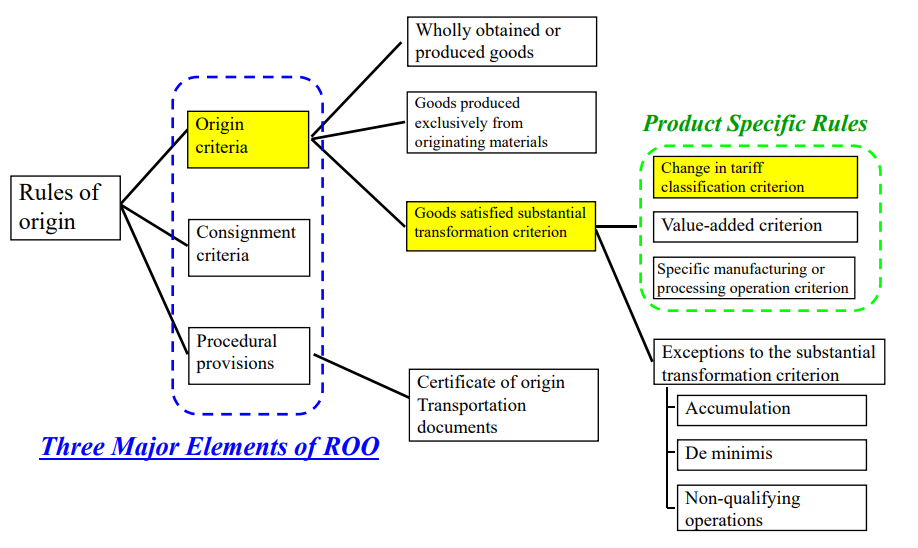 The Harmonized Commodity Description and Coding System, generally referred to as “Harmonized System” or simply “HS“ is a multipurpose international product nomenclature developed under the auspices of the World Customs Organization (WCO), an independent intergovernmental body.
The tariff schedule containing the headings, subheadings and the corresponding number codes, the notes to the Sections, of the Chapters and the Subheadings, as well as the General Rules for the interpretation of the HS.

All the HS codes can be searched from the WCO webpage. 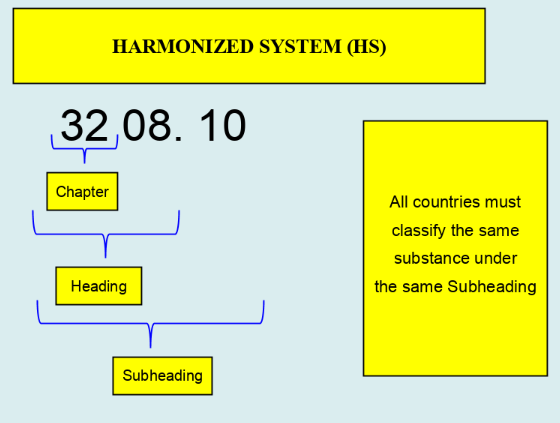 Retrieved from:Identifying:Handbook on Rules of Origin for Preferential Certificates of Origin

Depending on the Free Trade Agreement (FTA) requirements, the good would
have to undergo either a change in Chapter, Heading or Sub Heading level in order to qualify
for preferential treatment under the FTA.
Therefore, to use this method, manufacturers and/or exporters are required to know the HS
classification of the final good and the non-originating raw materials.

Even if the materials from third countries (non-originating materials) are used in the production, goods
are considered as originating when the goods satisfy the requirement set out in the product-specific rules (PSR).

PSR is generally provided as an annex to each EPA.
In most of the EPAs, PSR is stipulated in the form of either: “change in tariff classification”,
“qualifying/regional value content”, “specific manufacturing or processing”, or a combination of these.

Here is an example of PSR stipulated in the Annex to EPA. 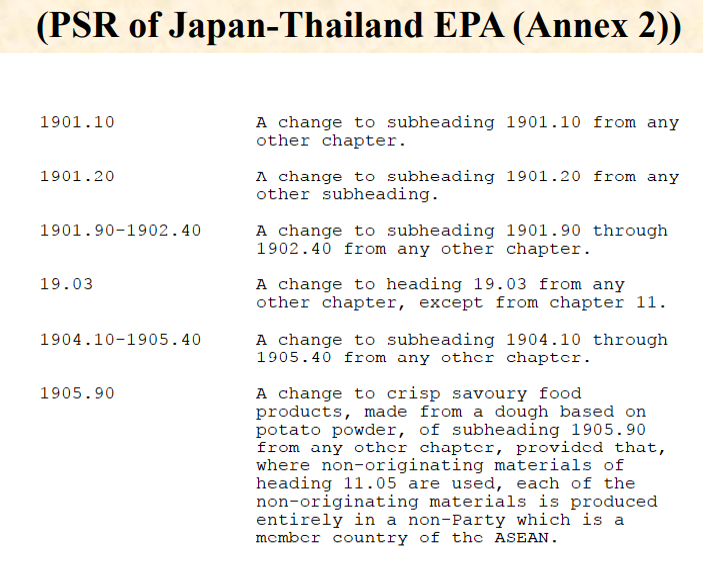 If the materials from third countries (non-originating materials) are used in the production,
Usually, we need to check PSR stipulated in the Annex to EPA.

How to read Product-Specific Rules(PSR)

In this situation, we need to check if a toasted bread can be qualified as an originating
good of Thailand Under Japan-Thailand EPA. 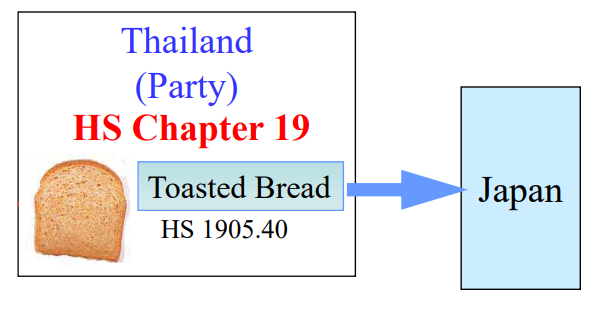 It looks like the toasted bread is Thailand origin, but found out that the materials
from third countries (non-originating materials) are used in the production. 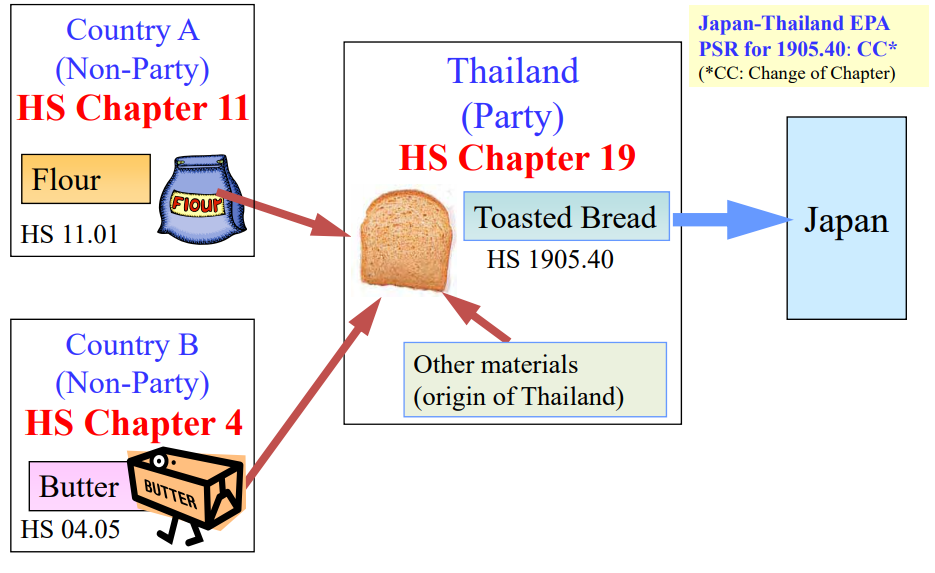 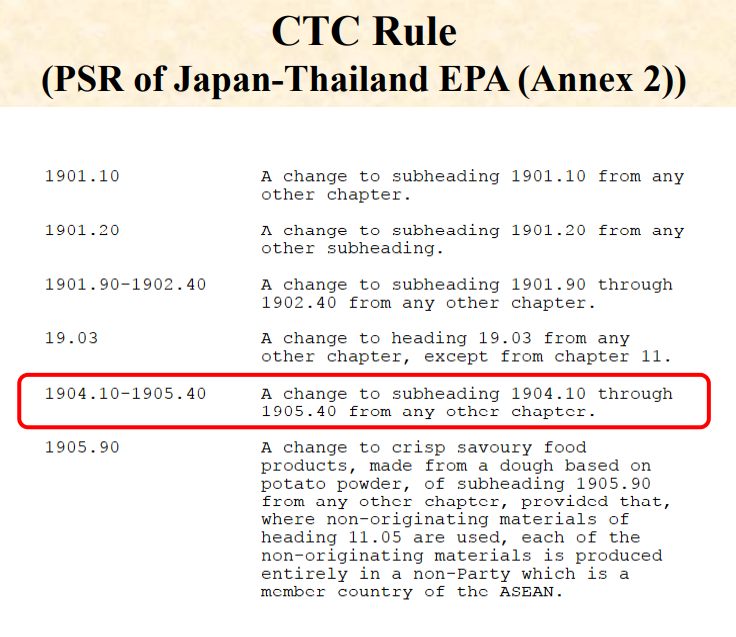 The Toasted Bread is an originating good under Japan-Thailand EPA because
a change from chapters 11 and 04 to chapter 19 has occurred.

Example of under Japan-Thailand EPA The Toasted Bread is considered as an originating good.
Here is another example of  Japan-Vietnam EPA. 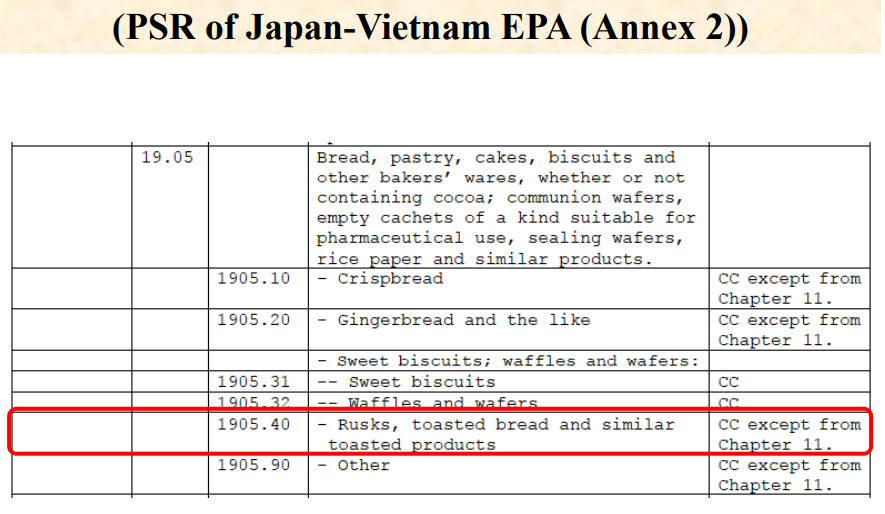 PSR for toasted bread is “CC except from Chapter 11” of CTC rule (require Chapter in Change).
In this production Flour (HS Chapter 11) is used as a non-originating material.
It does not satisfy the PSR. 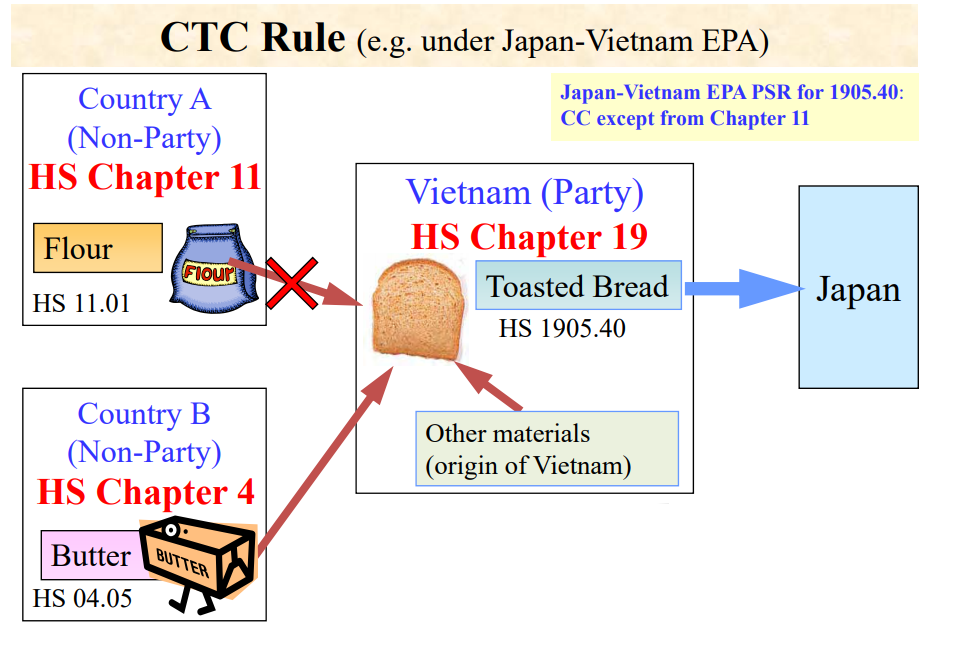 Without applicable exceptions to the substantial transformation criterion
toasted bread can not be qualified as an originating good of Vietnam.

PSR: Change of heading (change in the first 4 digits of the HS)(CTH)